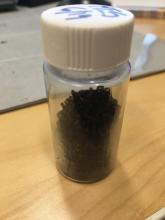 The Arizona Department of Forestry and Fire Management's Urban and Community Forestry Division continues to monitor a non-native bark beetle in Arizona. The Mediterranean Pine Engraver Beetle or MPE - (Orthotomicus erosus) was discovered in the Phoenix-metro area in 2018. MPE are native to Europe, the Middle East, northern Africa, and China. They likely arrived in the United States by riding in solid wood packing materials. MPE are tiny, about 3-3.5mm long and reddish-brown in color. To date, MPE have only been found on eldarica pines in the Phoenix-metro area.

MPE beetles generally attack distressed trees by boring holes in the bark and chewing on the layer just under the bark, called the cambium layer, where a tree transports sugars and water. Tunnels created by the beetles block the tree's ability to transport water and nutrients, in turn killing the tree.