According to the National Fire Protection Agency, smoking remains the leading cause of home fire deaths in the United States. In fact, a 2017 NFPA report reveals, seven people a day died in house fires across the country.

To help reduce these deaths, the United States Congress tasked the National Institute of Standards and Technology, or NIST, to explore whether cigarettes with reduced ignition propensity were technically and commercially viable.

A multitude of studies were done by a committee consisting of federal agencies, fire departments and health advocates, and resulted in the need for standards to produce fire safe cigarettes.

Then in 2004, New York became the first state to mandate that manufacturers can only provide the state with fire standard compliant cigarettes. Five years later, Arizona adopted the law that required all cigarettes sold in the state to be 'fire-safe.'

Effective August 1, 2009, all cigarettes, as defined in ARS 41-2070.2, sold in the state of Arizona must comply with the Office of the State Fire Marshal's Fire Safe Cigarette Standards. These standards are defined in ARS 41-270 - 41.2170.8. Any manufacturer who intends for its cigarettes to be sold must have its cigarettes listed as compliant in the Office of the State Fire Marshal's Directory of Fire Standards Compliant Cigarettes.

Although the certification fee is for brand family, each brand style within a brand family must be individually tested and certified as Fire Standard Compliant.

If a manufacturer makes a change to a cigarette that alters its compliance with ARS 41-2170 - 41-2170.8, the cigarette must be re-certified before being lawfully sold within the state of Arizona.

Fire Standard Compliant Cigarettes, or FSCs, are designed to reduce the amount of time that a cigarette continues to burn when it's not actively being smoked. By reducing the amount of time the cigarette continues to burn, it is less likely to ignite furniture or bedding materials. The predominant method that cigarette companies use to produce Fire Standard Compliant Cigarettes is to wrap cigarettes with two or three thin bands of paper that is less porous than the outer paper tube. These bands act as 'speed bumps' slowing down the burning of the cigarette, thus causing it to self-extinguish. 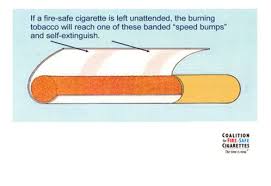 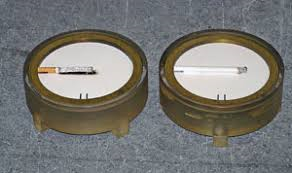