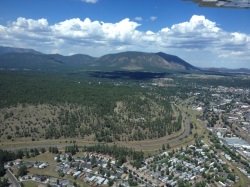 Flagstaff from the Air

Insects and diseases exist in urban and wildland sites. How is it possible to keep an eye on so much land, tracking outbreaks and other forest health issues? The Arizona Department of Forestry and Fire Management partners with the US Department of Agriculture Forest Service to survey millions of acres of Arizona’s forest resource from the air. Aerial Detection Surveys or ADS can provide land managers and the public with information about landscape-level forest and woodland health conditions.

The ADS program is very useful for surveying large stretches of forest, but one of the major benefits of the information is long-term data of insect and disease activity of areas flown year after year. The USDA has completed annual aerial survey flights in select areas since 1947, though most parts of the country have been involved in aerial surveys of forested acres for about 50 years. Some of the earliest flights occurred in 1920 to assess western spruce budworm infestations in parts of Canada. From the air, experienced surveyors can provide approximate locations, acres affected and identify damage causing agents with a relatively high degree of accuracy. Today, computers with GPS units are used to map affected areas and attribute damage to insects or diseases. 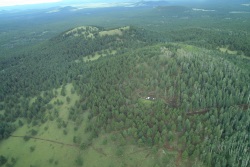 The vast majority of the acres surveyed from 1,000 ft. above the ground are of wildland forests. However, some urban forests are surveyed at the same time. Many of the communities that are surveyed are those found in and around National Forests. Often, in urban areas, identified forest health issues include road salt damage, tree defoliation, and, sometimes, tree mortality. Pinyon needle scale has been identified in and around Payson, frost damage in Show Low, and bark beetle caused mortality has been mapped widely across communities in northern Arizona. Unfortunately, fine-scale forest health issues (e.g. the one dead tree at the end of the road) are sometimes difficult to capture from such a distance. In general, Arizona Department of Forestry and Fire Management has flown 1-3 million acres of Arizona’s forests each year for more than a decade. In 2014, the department flew 2.75 million acres, and that number increased to 3.27 million acres in 2015.

When forest health issues exist, forest health staff offer this information to land managers, and all of the data collected across the country can be accessed on the internet. When local land managers and officials receive the information, action can be taken depending on the nature of the forest health issue. The USDA FS Forest Health Technology Enterprise Team  works with USDA FS Forest Health Protection to deliver results of the ADS program to the public. The team has developed easy-to-use tools for the public to access the information.

For more information on the Aerial Detection Survey Program at the Arizona Department of Forestry and Fire Management please call 602-771-1407.